There is one defining moment in each of our lives when it comes to our childhood memories and while it had already happened once when I was far too young to remember (or care), I couldn’t BELIEVE Wayne Gretzky could actually be traded! (Again). This is when it became a shocking reality to me that some of my favourite childhood heroes would not always be on the teams where I first learned about them in NHL ’94.

In My Mind: Los Angeles Kings

“The Great One” (or as he is now known as, “The Drunk One”) jumped ship from the LA Kings to the St. Louis Blues in ’95-’96, to hook up with his old pal Brett Hull just in time for a first round playoff match-up with the Toronto Maple Leafs.

It wasn’t bad enough that Gretzky single handedly ruined my childhood by preventing the Leafs from winning the Stanley Cup in ’92-’93 (because we all TOTALLY know they would have beaten the Canadiens that year! Felix Potvin was WAY better than Patrick Roy). Anyways, fuck Gretzky.

In My Mind: New York Rangers

You can’t mention Wayne Gretzky without talking about Mark Messier. I remember this as being one of the first big name players to totally blow off a team and a city that was the perfect fit in order to cash in on a big contract. Luckily for Vancouver Canucks fans (i.e. fellow Nostalgia Blogger, Ben) this single signing financially crippled their roster and resulted in the departure of Pavel Bure and Trevor Linden. Speaking of which … remember when Linden played for the Islanders and Bure played for the Rangers?

In My Mind: Vancouver Canucks

After being stripped of his captaincy once Messier rolled into town, Linden was banished to Long Island to become their Captain. He then bounced around before returning to the Canucks in time to witness Todd Bertuzzi (ironically the man he was traded for) break Steve Moore’s neck. 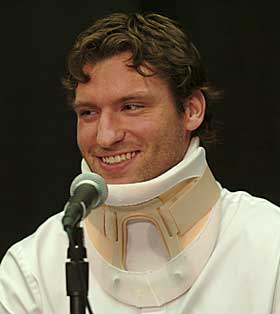 In My Mind: Vancouver Canucks

“The Russian Rocket” took his talents to South Beach WAY before Lebron and recorded back to back 60 goal seasons before his knees gave out and he went to where all former NHL stars go to die (no, not Toronto), that’s right … the New York Rangers! Which brings me to my next “Remember When?”

In My Mind: Buffalo Sabres

In My Mind: Calgary Flames

I’ll bet you’re thinking that I’m going to make fun of poor Theo for all of his alcohol abuse and drug use … well, you were right! But seriously, he was taken advantage of as a young boy. Leave him alone, assholes.

In My Mind: Philadelphia Flyers

“The Big E” is one of my favourite players of ALL TIME! Especially during his 33 game, 11 goal tenure with the Toronto Maple Leafs in 2005-’06. Unfortunately for me and the city of Toronto, John Ferguson Jr. didn’t see the value in Lindros and let him walk the next season where he dominated in Dallas for another 49 games and 5 more sweet goals! The Rangers train keeps on rolling with …

In My Mind: Edmonton Oilers

Remember When? Mighty Ducks of Anaheim

While I actually never watched him play for the Oilers, I understand he was pretty good. I do remember him playing with Gretzky in for the Kings because I had his hockey card. He then joined his former teammate Messier in New York the same year 99 was traded to the Blues. Kurri was one of several Oilers Dynasty players to end up on the Rangers well past their prime.

In My Mind: Chicago Blackhawks

He spent so little time on the Sharks that he didn’t even bother to get new pads or a new mask! Classic Eagle.

In My Mind: Detroit Red Wings

When I was a kid Coffey was one of the best defencemen in the NHL playing for a powerhouse in Detroit. Plus he had already won several Stanley Cups in Edmonton and Pittsburgh. By the end of his career he was a journeyman hanging on to past glory. Most people would assume that he made the move from Hartford to Carolina when the team relocated in 1997. Nope! Coffey bolted to the Flyers and Blackhawks before coming back to play for the Hurricanes!

In My Mind: Chicago Blackhawks

Remember when? Of course you don’t! Who cares about Denis Savard. But remember those first generation Lightning jerseys with the italic box style lettering?! And they’ve won a Stanley Cup!?!