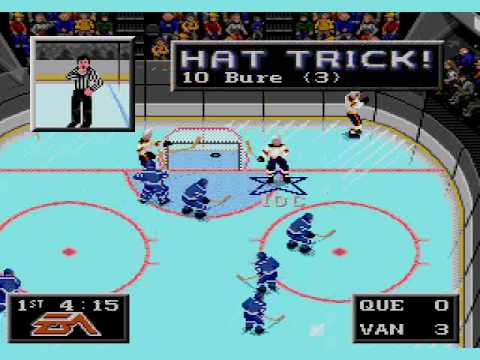 In my opinion, hockey video games are the greatest sports video games. Many people may disagree with that statement but keep in mind, people doubted me when I said that Mac and Me would be the highest grossing movie of all time (If I don’t look at the facts, I can’t be wrong! U-S-A! U-S-A!).

Anywho, a gent by the name of Matt Larkin wrote an amazing piece on the history of hockey video games (you can read it in its entirety here). However, we know many of you just want the nuts and bolts of it along with some fun videos (that you won’t even sit through, god, how lazy are you?) to go along with it. So here is a summary of the article. Enjoy!

THE 1980S: COLD, HARD STEEL “With presentation touches like intermission cut sequences and mini games, plus the fun factor of getting a penalty for losing a fight, Blades of Steel inspired tournaments and bitter rivalries between friends. It was the game you were pumped to play after watching Hockey Night in Canada.”

“Everything about ’94 brought them into a realistic NHL world. It had a crowd that reacted with cheers and got louder and louder for the home team after goals and hits. It had authentic organ music. It even had an out-of-town scoreboard that cut to computer-generated highlights from other games. Frills like these immortalized the game to the point it’s more nostalgically acknowledged today than any other. That’s why the current editions have an NHL ’94 controller configuration available.”

“The newfound ability to free-form stickhandle was one example of many efforts from EA – and competitors like the NHL 2K series – to recreate real-world physics. One way of doing it was to record actual movements via motion capture technology. That meant hiring players – usually college-caliber guys, as they had time to work the odd 16-hour day and “appreciate the money,” Ramjagsingh says – to wear sensors and perform every in-game action imaginable. The sensors are actually reflective balls. Cameras surrounding the rink bounce light off them to triangulate and “record” every movement instantaneously.”

THE FUTURE: WHAT COMES NEXT?
“One look at NHL 15 suggests J.R. is bang on. The body, equipment and jerseys flow freely, independent of each other, creating entirely unpredictable puck bounces. There are 9,000 individual fan models for the crowds, and the ice surfaces are so real that the programmers even replicate the paint an inch-and-a-half beneath the ice.”
https://www.youtube.com/watch?v=vbskn16gpQE