This was a cartoon that I watched at like 6:45am before school when I was very young. We are talking like pre-school to kindergarten. All I really remember is that Hercules would get his power from a ring. He puts on the ring, some lighting hit it and whammo, we got a Hercules at full power. The other things I remember about this show was a little centaur named Newton who spoke in an annoyingly high pitched voice and another…ah…thing…named Tewt who only spoke using a flute or fife or something. So there you have it. You are all caught up on what this show was about.

Oh and they totally ripped off the image of Hercules to create Superman years later: 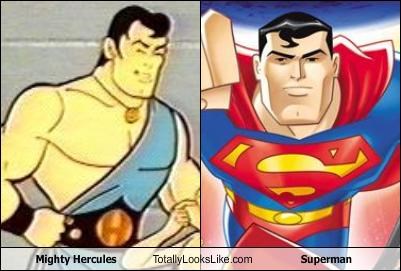